Forests are not just the group or a series of trees, it much more than that. Forests supports various life as we know it not just because we utilize the trees, because of its fruit and its trunk to eat and make things but also these trees slab help put balance in our world in many ways that we always undermine.

But these are just a scratch on the surface literally because the forest is also a major player in the water and carbon cycles which we take for granted. Deforestation happens every day around the world as we speak regardless if it’s man-made or natural. These damages take a toll on our planet and the more forests we lose, the more that we will suffer the consequences. The effects of deforestation is a big problem:

Greenhouse gas emissions: this is all about carbon dioxide; carbon dioxide produces this invisible layer in our atmosphere that serves as a wall of protection from the radiation of the sun. This radiation is in a form of heat that contributes to global warming. Forests are not just the ones that have this capacity but all of us as well, but with the lack of support from trees, global warming will continue. 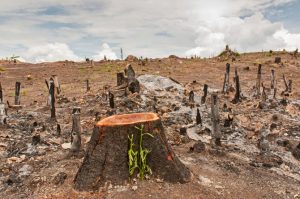 Water cycle: Have you ever tried being oxygenated in the hospital? They don’t just give you plain oxygen; it has a partner called a humidifier. The purpose?So that the oxygen that you inhale won’t be dry. Just like our air, it has a water molecule around that is why you don’t feel dry when you breathe. Forests contribute to this by seeping water into the ground and release it into the air humidifying it. Without forests, lands will dry.

Soil erosion: Trees are like anchors or even a wall of root underground that helps the soil retain its integrity. Without the trees the soil gets dry and there will be nothing that will anchor it when it’s about to fall off especially when there’s rain occurring, and when that happens it won’t be just a simple soil erosion but a landslide.

Livelihood: Forests houses animals, other plants and as means of resources. Hunting, medicines, houses, food and etc. These are just a few thing that will be gone if destruction of the forests continues. We rely on the forests because it gives us so much, if we destroy we will also be the ones that will suffer.

These effects are even just a tip of the iceberg if we don’t act to save the forests. We know that we are doing this for development and money but as to what costs? There is a right way of doing things and we’re not doing it. We are the only creatures that have the capacity to preserve and protect the forests. If we don’t act now our children and their children will suffer and so as the other billions of people around the world.

Deforestation Aftermaths
EDUCATION OUTSIDE THE CLASSROOM